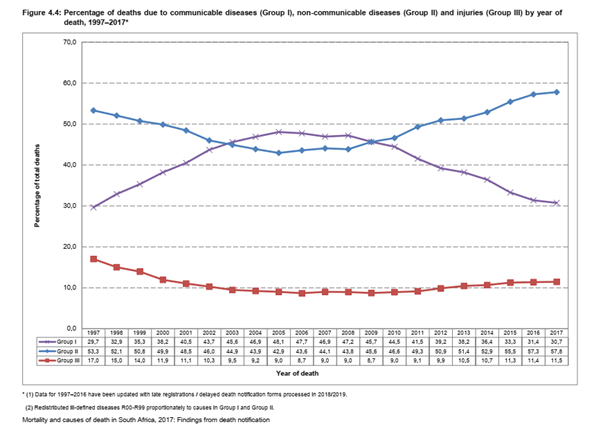 NCDs as a cause of death widening the gap 2017

#NCDs widening the gap in the wrong not closing it. 2017 death from StatsSA before #COVID-19
Click here to download the report

The greatest burden is for NCDs and accidents, injury is also known and “unnatural causes” 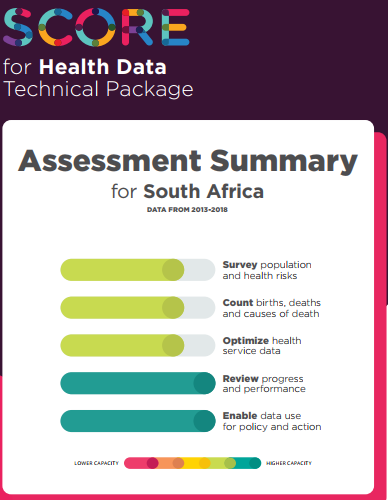 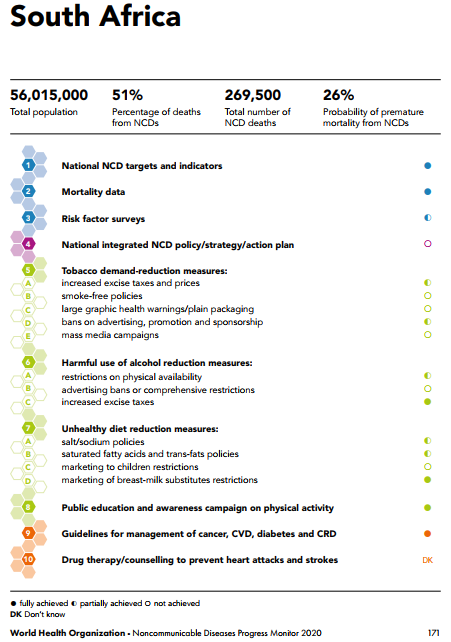 Mapping of NCDs in the WHO African Region 2018

In 2016 there were 4 national NCDs civil society organisations in the AFRO region: Nigeria, South Africa and Zambia in addition to the regional East African NCD Alliance. The mapping exercise looked at:

Tenfold increase in childhood and adolescent obesity in four decades: new study by Imperial College London and WHO
World will have more obese children and adolescents than underweight by 2022

World will have more obese children and adolescents than underweight by 2022 10 October 2017 More than 1000 contributors participated in the study, which looked at body mass index (BMI) and how obesity has changed worldwide from 1975 to 2016.

Obesity rates in the world’s children and adolescents increased from less than 1% (equivalent to five million girls and six million boys) in 1975 to nearly 6% in girls (50 million) and nearly 8% in boys (74 million) in 2016. Combined, the number of obese five to 19 year olds rose more than tenfold globally, from 11 million in 1975 to 124 million in 2016. An additional 213 million were overweight in 2016 but fell below the threshold for obesity.

Lead author Professor Majid Ezzati, of Imperial’s School of Public Health, says: “Over the past four decades, obesity rates in children and adolescents have soared globally, and continue to do so in low- and middle-income countries. More recently, they have plateaued in higher income countries, although obesity levels remain unacceptably high.”

Professor Ezzati adds: “These worrying trends reflect the impact of food marketing and policies across the globe, with healthy nutritious foods too expensive for poor families and communities. The trend predicts a generation of children and adolescents growing up obese and at greater risk of diseases, like diabetes. We need ways to make healthy, nutritious food more available at home and school, especially in poor families and communities, and regulations and taxes to protect children from unhealthy foods.”

Nevertheless, the large number of moderately or severely underweight children and adolescents in 2016 (75 million girls and 117 million boys) still represents a major public health challenge, especially in the poorest parts of the world. This reflects the threat posed by malnutrition in all its forms, with there being underweight and overweight young people living in the same communities.

Children and adolescents have rapidly transitioned from mostly underweight to mostly overweight in many middle-income countries, including in East Asia, Latin America and the Caribbean. The authors say this could reflect an increase in the consumption of energy-dense foods, especially highly processed carbohydrates, which lead to weight gain and poor lifelong health outcomes.

Dr Fiona Bull, programme coordinator for surveillance and population-based prevention of noncommunicable diseases (NCDs) at WHO, says: “These data highlight, remind and reinforce that overweight and obesity is a global health crisis today, and threatens to worsen in coming years unless we start taking drastic action.”

In conjunction with the release on the new obesity estimates, WHO is publishing a summary of the Ending Childhood Obesity (ECHO) Implementation Plan. The plan gives countries clear guidance on effective actions to curb childhood and adolescent obesity. WHO has also released guidelines calling on frontline healthcare workers to actively identify and manage children who are overweight or obese.

Dr Bull adds: “WHO encourages countries to implement efforts to address the environments that today are increasing our children’s chance of obesity. Countries should aim particularly to reduce consumption of cheap, ultra-processed, calorie dense, nutrient poor foods. They should also reduce the time children spend on screen-based and sedentary leisure activities by promoting greater participation in physical activity through active recreation and sports.”

Editors notes:
The paper presents the first ever comprehensive data on underweight through to obesity for children and adolescents aged five to 19 years and provides startling findings on the increasing numbers and rates of young people being affected by obesity.

The study calculated and compared body mass index (BMI) among children, adolescents and adults from 1975 to 2016, and made projections based on current trends in obesity rates.

BMI is a measure of a person’s weight and body fat mass for their height, and indicates whether their weight is healthy.

Calculating BMI is the simplest way to assess a person’s weight status, and the most common tool used to determine under-, healthy- and overweight and obesity. Action to curb obesity is a key element of the 2030 Agenda for Sustainable Development. Sustainable Development Goal (SDG) target 2.2 commits the world to ending all forms of malnutrition by 2030, including overweight and obesity. SDG target 3.4 commits the world to reducing premature deaths from NCDs by one-third by 2030, including through prevention of obesity.

The findings also showed that:

Global data for obesity and underweight

In 2016, there were 50 million girls and 74 million boys with obesity in the world, while the global number of moderately or severely underweight girls and boys was 75 million and 117 million respectively.

In 2016, the obesity rate was highest in Polynesia and Micronesia in boys and girls, at 25.4% in girls and 22.4% in boys, followed by the high-income English-speaking region, which includes the USA, Canada, Australia, New Zealand, Ireland and the United Kingdom.

The areas of the world with the largest increase in the number of obese children and adolescents were East Asia, the high-income English-speaking region, and the Middle East and North Africa.

Nauru was the country with the highest prevalence of obesity for girls (33.4%), and Cook Islands had the highest for boys (33.3%).

Among high-income countries, the United States of America had the highest obesity rates for girls and boys.