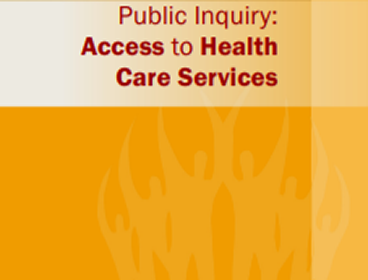 os  highlighted the problems of access to health services by millions of people living with NCDs+ in his tweet.  His tweet certainly mirrors what the SA NCDs Alliance and our allies have been saying since 2007 when the SA Human Rights Commission  (SAHRC) held its first public hearings into the right access to health services.
COVID-19 changed the parameters of vulnerability to include NCDs+, mental health, and reemphasised disability in all its shapes and forms.

15 years ago the primary focus was understandably on access to HIV/AIDS and TB services. It was the height of the communicable disease epidemic. And amidst our homegrown “AIDS-denialism”. It was also the midpoint of the Millenium Development Goals (MDGs) where vast amounts of funding were channelled into communicable diseases and maternal-child services. That pattern of expenditure and funding remains in place today.

The report’s executive summary is salutary: it fits today’s health service access issues in the COVID-19 pandemic. Just substitute NCDs+ for communicable diseases.  And, we have a similar complaint today.
The report’s opening quote is ironically, but not surprisingly, from The AIDS Law Project, the early version of Section 27:

“We don’t yet have a definition of essential health services. This means we don’t have a base line for the right to health and it is impossible to cost the health service and thereby determine objectively what can be
afforded.”

We still don’t have the definition. But HIV unlike NCDs+ is a  National Development Plan priority. As for the rest of the conclusions, they mostly are unmet PLWNCDs+  The main change to health services is that HIV/TB services dominate primary health care. We beg for evidence-based inclusion of NCDs + throughout the life-course. And, more not just a tack on to HIV, TB and STI services.

That is why we fight on.  Read the SAHRC 2007 report on access to health services SAHRC 2007Health Report

For the next 15 years, the newly  adopted Sustainable Development Goals (SDGs) will guide what donors fund and what countries push – and the world may just take a page from Africa’s playbook as it pursue universal health coverage.

Born in Springs on Johannesburg’s East Rand, Matshidiso Moeti grew up watching her doctor parents tend wounds and set bones in nearby KwaThema. The little girl destined for big things learned early that injustice and inequity were their own sorts of plagues. “My parents were doctors in the township and ran a practice…so one was aware of the struggles of families in the community,” she said. “Even by the time I was 7 or 8 years
old, I remember reading The Post newspaper and being very much aware of the political system in place, aware of what was essentially an unjust society… this influenced me a lot.” When Moeti’s parents moved to Botswana, her father took to the bush conducting small pox eradication campaigns. Her mother took a post at the Botswana Ministry of Health, which led her to what is now Kazakhstan for a work meeting in 1978. When Moeti’s mother returned home, she had been a part of history. Her meeting had adopted the Alma-Ata Declaration, which made the case for universal health coverage. It would also shape her daughter’s destiny.

Universal health coverage is one of the 169 targets and 17 goals comprising the SDGs adopted by the United Nations on Friday 25 September. They take over from the eight Millennium Development Goals adopted 15 years ago. The product of hard

negotiations and almost 100 international consultations, the SDGs are sufficiently vague to read like a Utopian laundry list. The real meat likely to guide governments’ and donors’ money is hidden in the SDG’s targets, which include the roll out of universal health coverage (UHC).

But what the world committed to in New York this weekend, Africa has been slowly mulling over for the last decade as more countries including South Africa turn to UHC as a way of improving health outcomes and stamping out deadly inequalities. From Nigeria to Rwanda, African countries are carving out new ways of dolling out – and paying for – healthcare. END_OF_DOCUMENT_TOKEN_TO_BE_REPLACED