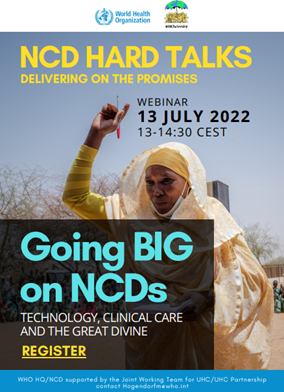 NCD Hard Talk_13 July_flyer
We are pleased to invite you to the next NCD Hard Talk webinar taking place on Wednesday, 13 July 2022, 13:00 – 14:30 CEST titled “Going BIG on NCDs: Technology, Clinical Care and the Great Divine.”

Profound and urgent changes are required to respond to the accelerating NCD burden, and a global shake-up is needed to reimagine the possibilities – and invent solutions fit for this new era. The recently established Global Group of Heads of State and Government on NCD provides an opportunity to engage the highest authorities on these BIG NCD solutions.

In this NCD Hard Talk session, we explore three examples of distinct, cutting-edge visions that can radically impact NCD outcomes, including:

Join us on Wednesday by registering here: https://who.zoom.us/webinar/register/WN_aAPSps-cRduO26HOaI4bYA

Today is the health budget speech at 14:00, and in the interests of transparency and inclusivity, it would be great if we, the people, had a look at it beforehand. The budget speech is a version of the Annual Performance Plan (APP) for the financial year to 31 March 2023.

So we are already into the financial year, and the APP23 s already in progress. Having asked for said APP23 PDF, and scouring government and parliamentary websites, we are still in the dark. The closest we came to is a presentation from the health portfolio committee.

The most positive aspect for NCDs+ is that NCDs+ are still in stream, branch or programme 3 along with communicable diseases. At least it hasn’t be shoved back in Programme 4 Primary Health Care where it languished without food or water.

Mind you it is unlikely to change much since the Medium Term Strategic Framework 2019-2024 (MTSEF24) does not prioritise NCDs+ or allocate funding. Except in the most peripheral way. I call this the legacy of 3M era: MDGs, Motsoaledi and Mkhize. Too bad that we are in SDG times and need different action to achieve universal health coverage (UHC target 3.8) and there is more than the target 3.4to achieve action on NCDs.

Joy there is a change to the number of outcomes and outputs covering NCDs+ in the APP23. That means a lot without a programme budget and an implementation plan.