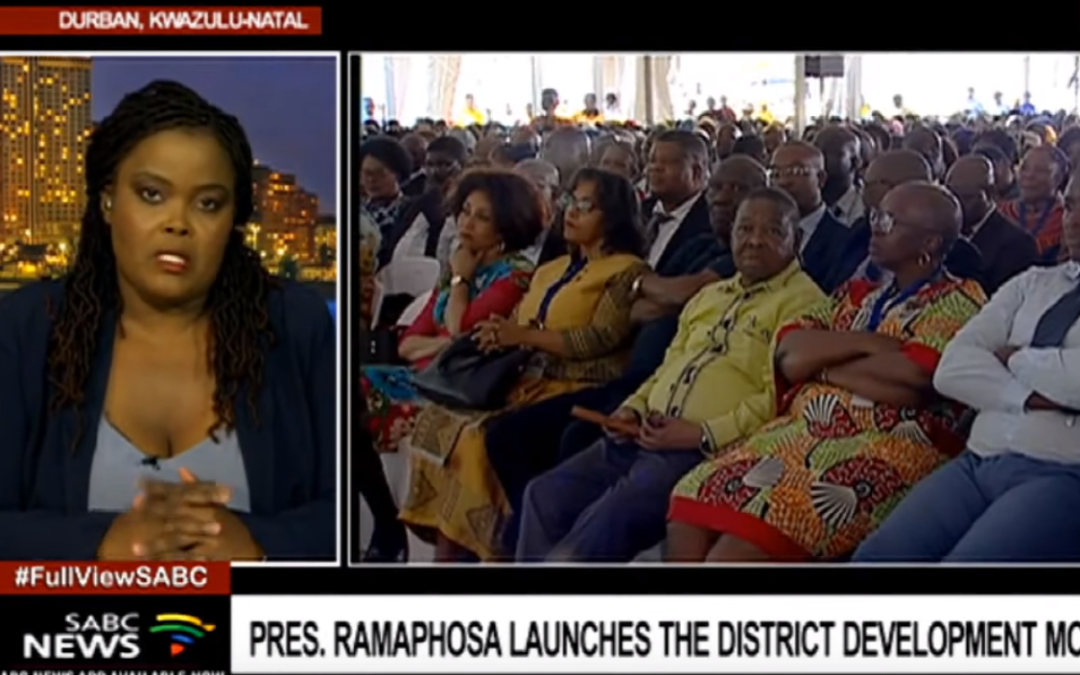 The extended PCC meeting included premiers of the 9 provinces, mayors of 44 district and 8 metropolitan municipalities. It convened to assess progress on the District Development Model (DDM) implementation. It resolved that all spheres of government must work together for efficient service delivery at a local level.

Definition – joining the dots in districts for integration

The DDM approach aims to improve integrated planning across government with the creation and implementation of ‘One Plan’ per district or metro. It brings together all partners to stop dysfunctional silos and to make a joint plan across departments with relevant stakeholders. Local partners include business, civil society, faith based communities and traditional leaders in a compact for development.

Piloted in 3 district municipalities (OR Tambo, Waterberg and Ethekwini) the DDM represents a paradigm shift in government’s efforts to build a coherent and coordinated state.

More than R70 billion of public sector investments have been made in the in the three pilot sites since August 2019. A further 20 districts are to be included by the end of 2020 with all districts covered by 2021.

An analysis of the lessons learnt so far confirms the enormity of the socio-economic challenges faced by districts. It also assisted government to direct spending to the areas of greatest need in a more informed and integrated way.  Transparency and accountability at a local government level is a much anticipated outcome.

The pilot of the DDM at the three sites assisted to uncover potential sectors for growth which can be tapped into to improve the living conditions of the most vulnerable. When the DDM is fully operational it will ensure greater inclusivity through gender budgeting.

The PCC has thoroughgoing discussions on the implementation of economic reforms to drive inclusive growth and job creation, infrastructure investment and development, efforts being made to bolster youth employment through the Presidential Youth Employment Intervention and as a progress report on the provision of water services and human settlements.

The President called the PCC an historical meeting of leaders from all spheres of government to support a “joined up approach” that when it comes to development no district gets left behind in development.

The President called on all social partners take the lessons learnt into account and use further impetus to the DDM vision. This vision of capable unitary developmental state with a strong neutral bureaucracy and solid societal relations.

NHI Bill being pushed for elections?

The revised NHI Bill was presented to Cabinet’s social cluster sub-committee on 27 November 2018  before going to Cabinet, according to the health department.

However, the department failed to answer a number of other questions including why it was pushing the Bill through the legislative pipeline so fast – when even Health Director-General Precious Matsoso admitted last week that she had not seen the latest draft.

Civil society organisations have called on Cabinet to “send the NHI Bill back to the Department of Health and to require a proper and thorough consultation process and consideration of options available for improvement of access to and quality of health care services in the country”.

Professor Olive Shisana, the NHI advisor in the Presidency, is driving the NHI process and has allegedly changed a number of clauses, according to insiders.

Acting Director General Ismail Momoniat wrote a letter to Shisana last week saying that Treasury could not support the latest version of the Bill as it had been “very substantively amended in October”, removing various agreements reached between the Ministers of Finance and Health.

Treasury was particularly concerned about amendments to the powers of provinces to deliver healthcare, inadequate costing of functions and the relegation of medical schemes to a complementary role which was “premature” and opened the Bill to legal challenges.

However, after the letter was leaked to the media, Treasury issued a statement describing it as “part of the vibrant and ongoing engagement to ensure policy coherence”.

“We have made substantial progress on key areas and have reached agreement on most of the major issues,” added Treasury. “Many of the issues raised by Treasury have been substantively addressed. We are confident that we will soon publish this important Bill for tabling in Parliament.”

But Treasury stressed that “the NHI must be adequately funded and successfully implemented while reducing the risks involved in the implementation of such a large and complex programme”.

Civil society organisations claim that the draft Bill was prepared even before a Presidential Summit that was supposedly called to consult various parties about the NHI.

“Public comments on the NHI over the past decade do not appear to have been taken into account, either between the Green and White Papers and the Bill or after the draft Bill was published for public comment,” according to a statement from Treatment Action Campaign (TAC), SECTION27, Rural Health Advocacy Project (RHAP), People’s Health Movement (PHM) and Lawyers for Human Rights (LHR).

“This makes a mockery of public consultation as required by the Constitution and opens the Bill up to future attack and delay on these grounds.”

The organisations also argue that the current Bill “risks damage to the functional elements of the health system – public and private” and that “government needs to focus on fixing the crises in private and public health rather than on hastily passing legislation that, in its current state, takes the country in the wrong direction”.

While the health department failed to respond to the civil society statement, last week Treasury said that “the implementation of the NHI and improvements in the quality of the health system go hand in hand and are therefore being addressed concurrently.” – Health-e News

Until a woman from the poorest family in the most crowded slum can be sure that her local clinic will have the medicine and staffing her government has promised, global health will remain uncertain

A great read from World Vision’s  Policy Report: Grassroots to global: 7 steps to Citizen-Driven Accountability for the Sustainable Development Goals

This is what the SA NCD Alliance supports. Do you?

Step 2 Work Together: Support collaboration among accountability actors, and aggregate citizen-generated information about the quality of service delivery at the subnational level

Thumbs up to the NCDs cluster of the National Department of Health (NDoH) for its responsiveness to stakeholder recommendations. The draft cancer plan, National Plan for the Prevention and Control of Cancer 2015 – 2020 (NCCP) is being reviewed by multisector – all of society stakeholder meeting early next month. Click here to review this draft.

Feedback from stakeholders on the 2014 a draft NCCP made it clear that more consultation was needed. The initial stakeholder meeting to its content (organisational structure) and process of development (planning process) in Pretoria on 6 February 2015.

The aims of the meeting include:

Professor Melvyn Freeman and the cluster team are to be congratulated on the transparent and inclusive step. The 1999 NCCP needs urgent revision to provide an integrated, comprehensive people-centered plan for South Africa. The new plan must take into account: